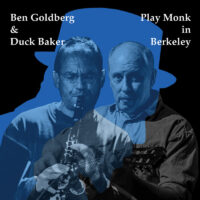 We are happy to announce the release of this duo concert by Duck Baker and clarinet master Ben Goldberg. It was made at a house concert in Berkeley, California in 2003, with the two musicians teaming up for a program devoted to Thelonious Monk tunes and arrangements. The sound quality of this record is not the best and because of this it is offered at a budget price of £8. Duck has recorded solo versions of all but three of these tunes on his own records (especially Duck Baker Plays Monk), but these duo versions are something else. The two musicians relate to the tunes and to each other in all kinds of imaginative ways, surprising themselves and their audience time after time.

We at Fulica Records feel that the high musical level more than compensates for the less-than-perfect audio quality on Play Monk in Berkeley, and feel sure that it’s release will be welcomed by fans of Ben Goldberg, Duck Baker, and Thelonious Monk.

Play Monk In Berkeley was recorded on a minidisc player, so while there’s no tape hiss and very little background noise, the slightly edgy quality that’s typical of this recording method is discernible, and occasionally a bit of distortion. To give listeners a fair sense of this we have isolated a section from the opening track (Monk’s arrangement of “It Don’t Mean A Thing If It Ain’t Got That Swing”) where these problems are noticeable. Most of the the record sounds better than this, but even with less than perfect sound, we think the music will appeal to fans of Ben Goldberg, Duck Baker, Thelonious Monk, and wide-open, modern jazz.

Ben Goldberg and Duck Baker got to know one another when the latter was working on the music of Herbie Nichols in the mid-1990s. Since Ben had already spent time studying Nichols’ music he offered to share some lead sheets of the tunes, which were hard to come by in those days. When Baker moved back to San Francisco in 1996, he and Ben found ways to work together, including Ben’s large group, Brainchild, and a trio that included violinist Carla Kihlstedt. They also played a couple of duo gigs, including the house concert at the home of Clifford Stanley where this recording was made. Like many musicians who have delved into Nichols’ music, Goldberg and Baker have also studied the oeuvre of Thelonious Sphere Monk, and each would make records of their interpretations in later years. The program for this concert featured nine Monk originals and two standards the pianist had put his stamp on, and Goldberg and Baker did far more than just run through the charts, devising challenging approaches to both the arrangements and improvisations that set up all kinds of fascinating interplay.

All compositions by Thelonious Monk except:
“It Don’t Mean A Thing If It Ain’t Got That Swing” by Duke Ellington
“Sweet And Lovely” by Gus Arnheim, Charles N. Daniels, and Harry Tobias