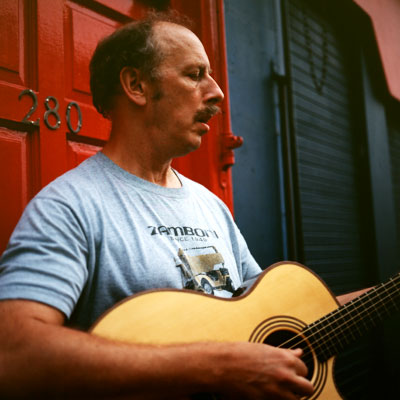 Duck Baker is a highly regarded finger-style guitarist whose repertoire spans the history of jazz, blues gospel and Appalachian music. His video lessons released through Steffan Grossman’s Guitar Workshop were a significant part of my development as a guitarist as I explored new styles.

I caught up with him at a recent gig at Brooks’ Blues Bar to yell out requests. I also managed to ask a few questions of this amiable, knowledgeable fellow.

Tell us a bit about your musical development…

Baker: I came of age during the sixties in Richmond Virginia – during the ‘Folk Scare’ as Utah Phillips called it – and there were coffee houses everywhere. I got a guitar when I was 14 or so and wanted to play rock n’ roll. I’m kind of glad it wasn’t easy to record stuff like it is nowadays. I could be blackmailed if that had been the case! As the band started to get good though, I started to lose interest and I started to fool around with finger picking – I learnt Cocaine Blues. I had a friend who was what you’d call a natural – he really had a hell of a sound playing acoustic blues. He joined our rock band and at that point it became more like a blues band.

Back then Britain was relatively deprived of this music – there wasn’t the original stuff going on so much. The frame of reference was a lot narrower, so to speak. Do you think you were better off?

Baker: Yeah, although I’d phrase it differently. All the first generation blues guys over here, particularly in London, actually saw the old guys that made it across – people like Big Bill Broonzy etc. I never saw any of those, just some local older black guys. Bands like the Rolling Stones deserve special credit for actually listening more closely, particularly to Muddy’s band – they really copied it, whereas The Butterfield Band was more modern and had a slight rock tempo to it. Although what Mike Bloomfield played on that first record was really something else…

Anyway, for us, it wasn’t that we saw more of the old guys it was just that in Richmond you grew up with black American people as a matter of course. Even people in the Ku Klux Klan did that – although I certainly was not in the Klan! So I think that’s the difference. Any place you went in America in those days there was that kind of music. I’ve always heard a huge difference between British blues players and those on the continent, and I think the language has a lot to do with that. 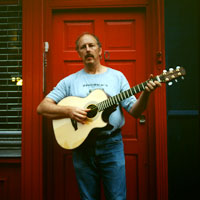 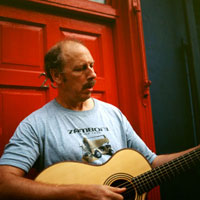 Your playing encompasses a wide range of styles, doesn’t it?

Baker: I’m a fingerpicker really, yeah. Blues is part of what I do but it was a really big part of how I grew up. The thing about it is that obviously the golden age of blues or jazz is over but that’s not to say you don’t get people playing with personality who have a way to make a contribution – to do something real.

Is that what you’re doing?

Baker: I certainly hope so! For me though I can’t tell where blues becomes rhythm n’ blues and so on, I don’t draw those distinctions. Ray Charles made some real down piano blues records, more so than, say, Roosevelt Sykes ever did. But Ray Charles also did country and western records so where does that leave you?

Why do you think these styles endure?

Baker: Well look at the alternatives. In the first place it should give everybody the blues… In the second place it should make you want something real – someone playing a guitar. I was lucky when I was a teenager – the guy who was really the biggest influence on me was a ragtime piano player, Buck Evans. He said to me, ‘You sound a lot better when you play a Doc Watson song than when you play a Robert Johnson song’. He’d play me his ragtime records and early Louis Armstrong – Hot Fives and Hot Sevens and so on – and that was when I really started to get educated about American music and saw it as all part of the same thing.

Do you think it’s a shame that people can be blinkered about it? That they don’t go beyond a certain point?

Baker: I’ve no problem with people coming from where there come from – you have to start somewhere. Although if someone asked me to listen to white electric blues bands all afternoon, I’d be a little unhappy. When I was young I didn’t want to hear Ma Rainey or Victoria Spivey and those people, which is insane now because that music was there before Robert Johnson. You hear Son House sing ‘The blues ain’t nothing but a low down shakin’ chill’, well that’s Ida Cox right there! Son and those people were listening to what was coming out of the big town like Memphis, which influenced what went on in the delta every bit as much as visa versa.

Baker: Yeah, odd tunes like Pick Poor Robert Clean – a crazy song, sort of an insult song performed on medicine shows and so on. All that remains is a few verses and it’s hard to work out what was going on. Now it’s folklore but back then it was just part of black culture.

I find the electric bass partly responsible for that shift in the feel of the music. What do you think?

Baker: Well, in the early sixties me and everyone else bought these records called Chicago Blues Today with Junior Wells and so on, and at the time these guys were pretty destitute. Within a couple of years though they were huge stars to all these adoring young white kids and chasing cute Danish girls round at festivals. That style of the music really killed Chicago blues though.

Y’know, Chicago blues was very complex music; when Muddy’s records were going on it’s very unpredictable, just like Dixieland jazz. It’s wild and raw; they’re each doing their own stuff and the drummer isn’t playing anything like a backbeat. That’s Chicago Blues, not what he was doing after 1968 or so. He still had a lot of charisma, obviously, and still worth seeing but that’s when the bass started playing in a different way. It’s still good but not the same as it was. I hear more real down blues in Thelonius Monk than in Fleetwood Mac, whom I really like by the way… but when you get that rock thing in there you’re doing something that really wasn’t in the music.

You’re now based in the UK, aren’t you?

Baker: I want to live in Europe now full time – as much to do with the political situation more than anything else. I get very embarrassed to be an American by the adventures Mr Bush has gotten us into. I know they’ve always been doing it – I’m a child of the sixties so I had Vietnam to worry about… But what makes me proud to be an American is all this stuff that happened. What I get proud about is things like Memphis Minnie singing What’s The Matter With The Mill? How anyone could come up with that, ‘I can’t hear no grindin’, tell me what’s the matter with the mill’ – that’s just great!

It’s the he language, isn’t it?

Baker: American. It’s really American. It’s what happened to music from this island mixed with African music. It only happened in the USA, it didn’t happen in Spanish America or anywhere else. There are English/British influences in the blues; people didn’t sing spirituals in Africa but a lot of them sound like syncopated Scottish songs. The black people absorbed the melodic sense and the white folk absorbed the syncopation. That’s when you started to get syncopated fiddle tunes. It’s interesting to me that people talk about integration and the mixing of cultures as a good thing but when it comes to music they want it to be segregated. They want the blues to be black, they want Celtic music to be this and so on. That’s not how it should be.

So are you staying in the UK?

Baker: Hopefully, yeah. I think I need to find a rich widow though. I tried the Internet dating thing but punching in ‘Charlie Patton’ and ‘Yacht’ I didn’t get any matches…

Duck is available for guitar lessons and can be contacted through his website. http://www.duckbaker.com/