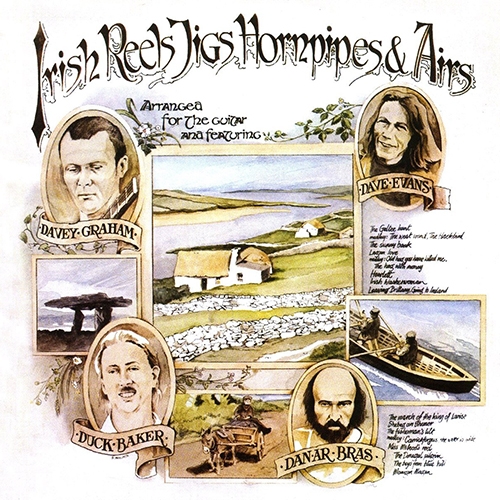 9. The March Of The King of Laois – Duck Baker

Review: Irish Reels, Jigs, Hornpipes, and Airs is the rare acoustic guitar CD that isn’t dominated by Leo Kottke-style wizardry or a John Fahey influence. It’s also a rare example of Irish music played traditionally and not with the ethereal trappings of new age music. It’s perhaps no surprise, then, that it’s necessary to travel back to 1979 to find an album filled with modest pleasures such as this one.

Only two of the four guitarists on this album (released on CD for the first time on Stefan Grossman’s Guitar – Workshop label) will be household names to even the most eclectic collector. Davey Graham was an infamous member of the British folk scene of the ’60s, releasing some oddball experimental records along with some expertly played traditional music. Duck Baker may be familiar to jazz fans as a player of finger-style jazz, in particular a CD’s worth of Herbie Nichols tunes. The other two, Dave Evans, and Dan Ar Bras, are not as well known, but contribute some lovely interpretations of these traditional Irish melodies.

All of the songs are beautiful and timeless, made all the more appealing by the simple setting. Baker’s medley of “The West Wind” and “The Blackbird” is particularly good, as is Evans’ “The Donegal Pilgrim.” Graham’s “Lagan Love” is particularly haunting, while Evans’ “Shebeg and Shemor” is beautiful. It’s pointless to pick a standout on an album that’s clearly designed to be a complete listening experience in itself, and while each guitarist has their own style, all of the renditions flow together beautifully (it would have been interesting to hear each of the four tackle the same tune in their own fashion to see what would happen). There is nothing like finger-style guitar to capture the pastoral and the idyllic simple pleasures of a life on the Isles. Simply put, this is one of the best collections of Irish guitar music available, and it’s terrific to have it back in circulation.

As an added bonus, the CD features PDF files of tablature of many of the songs. For a pretty decent fingerpicker they are easy to play well, and there are hours of fun to be had working through them.

– David Rickert, All About Jazz