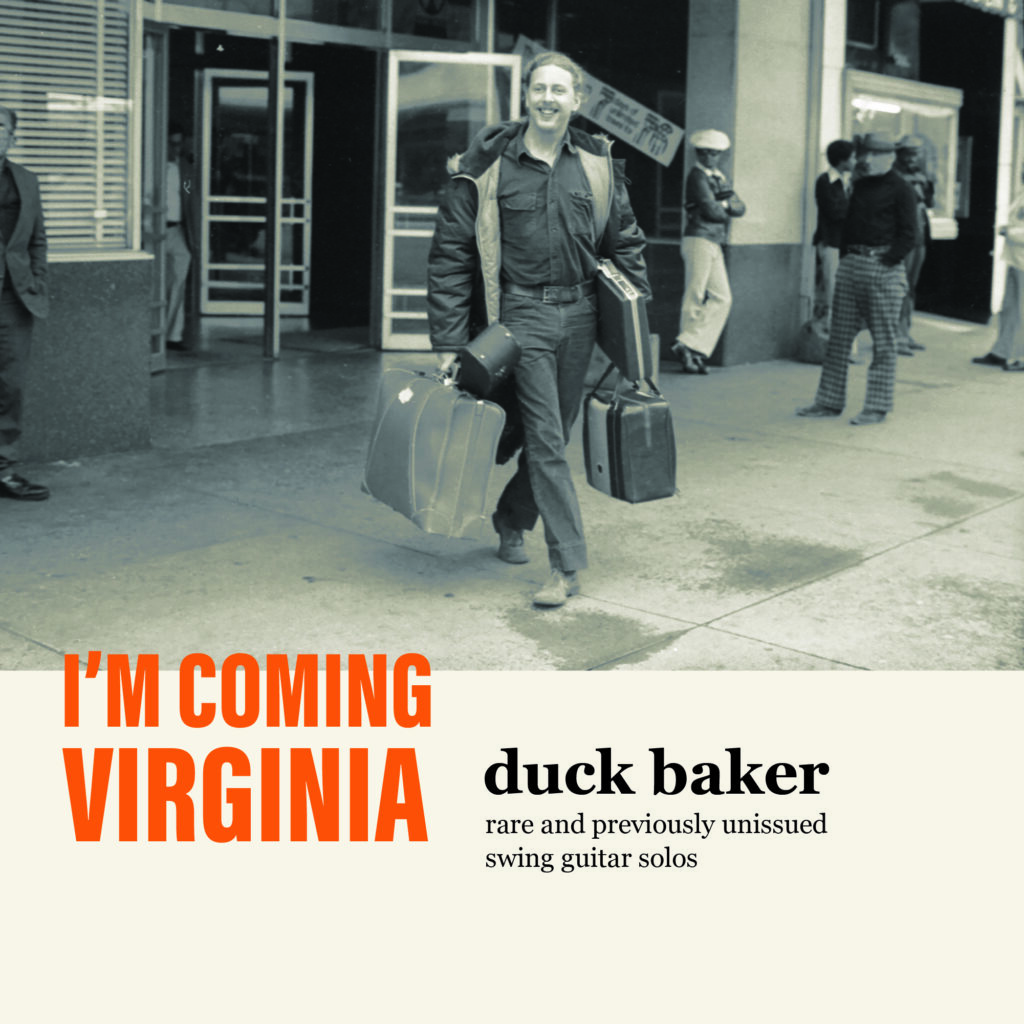 Cover photo: Duck Baker returning from his first tour of Europe, April, 1976. Taken in front of the Greyhound bus station in Richmond, Virginia by Lynn Abbott.

This collection is focused on performances of swing jazz tunes, with a bit of ragtime, blues and gospel thrown in. Half of the material is from live recordings, spread out over the course of more than 30 years, but there are also several unissued tracks from studio sessions, and a few that were issued on anthologies or other records that were not Duck Baker solo projects. When possible I have included pieces that have not been included on other releases, at least as solos.

Joseph Lamb’s “Cleopatra Rag” was recorded in the late 1970s, for a Kicking Mule anthology called Masters Of The Ragtime Guitar. I also recorded a version of “Walking My Baby Back Home” at around the same time, but since there was an unissued live recording from those early days, I decided to use that here. Studio versions of “That Rhythm Man” and “There’ll Be Some Changes Made” were recorded for my third solo record for KM, The King Of Bongo Bong, but these featured Mike Piggot on fiddle and Joe Spibey on bass. (Though unissued at the time, the trio version of “That Rhythm Man” appeared on the 2018 release “Les Blues Du Richmond”.) I performed solo versions of both these songs regularly in those days, and the versions here date from a very exciting tour for me, with Stefan Grossman and John Renbourn, in 1979. This was my first trip to Italy, and as acoustic music was popular there at the time, we performed in pretty big concert halls. I learned much later that several of these shows were recorded, usually by audience members, but judging from the sound quality, the Varese concert where I played these two songs was taken from the board. I liked Italy so much I wound up moving there in 1982, and early the following year recorded several tracks for an record produced by Giovanni Unterburger for his Lizard label, called Silk And Steel: Second Lizard Convention. “The Deep Blue C”, is taken from this anthology.

By 1986 I had moved back to San Francisco and was being managed by Bob Fisher, who produced one of the few solo records I made in the 1980s (The Salutation). Bob also backed a couple of demo sessions with the idea of finding a deal with some record label, something that proved impossible at the time. The version of “Sweet Georgia Brown” here dates from one of these sessions and represents my only solo studio recording of the tune, though I had been playing it since the ‘60s. I never recorded my version for Kicking Mule because Stefan noted that it was a pretty standard piece for fingerpickers, and it’s not like I didn’t have many other things to record. “Grace Street” first appeared on my second LP, When You Wore A Tulip, but I revisited it with a little requinto guitar for a demo tape I made in 1989 when someone was looking for tunes that might work for a film soundtrack (nothing I submitted was used, alas).

Once CD’s were established as the primary medium for recorded music, it became much easier to make records again, and this led to the release of two self-produced CD’s with singer Molly Andrews. These have long been out of print but the solo version of “Just A Closer Walk With Thee” that was released on American Traditional fits well here. “Georgia On My Mind”, “Blue Monk”, and “Sleepy Time Time Down South” were recorded in late 1990s studio sessions that produced various records, and these tracks were not used at the time for one reason or another. I did rerecord other versions of the first two but not “Sleepy Time,” an arrangement I had worked out in the 1970s. The other studio out-take, “When You Wore A Tulip”, dates from sessions for the 2017 CD The Preacher’s Son. This great old tune had been the title track of my second record and producer Mark Pavey suggested revisiting it, but when everything was in the can I decided to use other swing tunes for the CD.

Almost all of the other tracks were recorded at various shows at the Freight & Salvage Coffeehouse in Berkeley, CA, which is the venue where I have performed more than any other over the years, though “Take The A Train” is from a performance at La Fontana, a restaurant in Verona that programmed acoustic music for several years. The sound quality on this one is different because in venues like this it helps to use a pickup on the guitar. The stage was a bit cramped, too, so you can hear where someone bumped into the mic stand once or twice on this performance. I decided not to worry about things like that when I put this together and to go ahead and use tracks that had marginal sound, a few muffed notes, and even one case where I got confused on the lyrics, as long as the overall feeling seemed good enough. This arrangement of “A Train” is the way I came to perform it over the years, and is almost twice as long as the studio version heard on the 1979 record The Art Of Fingerstyle Jazz Guitar.