My Heart Belongs To Jenny 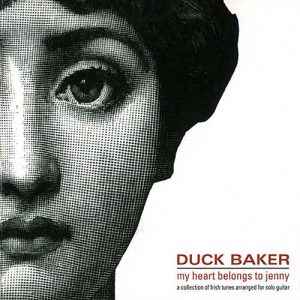 Download the album in MP3 format
from the ONLINE STORE

“It’s a rare musician indeed whose scope ranges from Turlough O’Carolan to Thelonious Monk (taking in country blues, Appalachian music and a multitude of other influences as well). That Duck Baker can bring not only mesmerising technique but a wealth of knowledge and experience to bear on such a wide expanse of music is truly a wondrous thing. Here he turns his attention to traditional Irish music where his has been an original voice for many years. This is no casual joyride to the New-Age Celtic twilight – this is the real thing! Duck’s involvement in the London Irish scene exposed him to some of the most significant players in traditional music – Raymond Roland, Bobby Casey, Roger Sherlock and his knowledge of the genre is both wide and deep. His gift is to absorb all this with the care and respect it is due and to use his talent to say something new with it. Listen and you’ll hear it.

As traditional music lovers know, a great many tunes are named for the doings of various mysterious, quasi-mythical characters. In fact, almost the only information we have about the doings of Charlie, Johnny, Jock, Jack, Polly, Molly, Kittie, or Kate are hints gleaned from these titles and the nature of the tunes themselves. Sometimes the titles are suggested by the tunes; you can sing the line ‘Paddy, Now Won’t You be Easy” to almost every line of the tune thus titled. More typically, the last melody line conforms to the title, as is the case with “Jenny Dang the Weaver”. But there is no such obvious explanation for most of the 611 “Jenny” titles that I know, from the prosaic (“Jenny Bowser”, “Jenny Pippin”, “Jenny Latin”) to the descriptive (“Jenny Picking Cockles”, “Jenny Drinks Nae Water”, “Jenny’s Welcome to Charlie”) to the difficult-to-envision (“Slighted Jenny”, “Flippin’ Jenny”) to the astonishing (“Jenny Run Away in the Mud”). Her name crops up frequently in Scottish and Irish collections. English Jenny tunes are rarer; I doubt if she was temperamentally suited to the situation indicated by “Jenny, Come Tie My Cravat”. But she has adapted to America quite well, as can be seen by “Jenny On the Railroad”, “Jenny in the Cottonpatch”, and “Jenny, Get Your Hoecake Done”.

Do not all these references evoke some sort of an archetypal creature, in the manner that Plato thought that there had to be a transcendent “plateness” and a “cupness” somewhere beyond time and space, in order for us to be able to apprehend everyday plates and cups? I doubt it not*, and can only humbly offer my homage to her Jennyness by naming both a tune and this recording in her honor. In this case the title actually suggested the last melody line, rather than vice-versa.)

I learned the beautiful “Pretty Girl Milking A Cow” from Larry Matthews while I was living in London in the late 70’s. This is one of those songs that are so well-known that you seldom hear them performed anymore, although the Scots have set a song called “Lizzie Lindsay” to a version of the air, which has fared better.

“Banish Misfortune” is another tune that is so overly-familiar that it’s regarded as “played out” by Irish musicians; I worked this version up when I was playing a lot with two Americans who like to mix Irish tunes with old-time material, Hal Hughes and Joel Stafford. Brother Hal, in fact, taught me several of the tunes here.
“Little Brown Jug” and “Market Girls” are two uncommon jigs, the latter of which would seem to be American, although jigs are rare outside the Northeast. Also from Hal and also American is the little-known but striking “Polly Put the Kettle On”, which bears no relationship either to the nursery rhyme tune or to the fiddle tune that’s related to it.
Another gem unearthed by Hal is the amazing “Huggerth the Puss”, which is given in a Scottish Collection (Kerr’s Fourth Collection of Merry Melodies) as an Irish jig. The third section here is twice as long as the normal eight bars, which one might think indicates a mistakenly omitted repeat sign in the music, but which seems increasingly convincing the more the tune is heard.

*SkepticaI readers are referred to De Selby’s classic treatment of the issue.

I learned “John O’Dwyer of the Glen” from a book years ago, though the great accordion master Tony MacMahon has a recorded version that I would have known at the time. It is sometimes interesting to couple laments like this with bright dance tunes, and “The Plains of Boyle” certainly fits that billing. This hornpipe, which I learned around 1980 from Pat Kilbride, has gotten a lot of deserved performance in recent years. One record which was enormously important to me as an introduction to Irish music was “Irish Dance Music” on Folkways. When I bought this release in the early seventies, there was very little of the music available in the US, and I virtually memorized the record.
“The Joy of My Life” and “The Banks of Lough Gowna” are both~ fairly well-known tunes, but Michael Gorman’s setting of the latter (on accordion) seems to be unique, and more interesting to my ear than the more familiar versions.
“Little Beggar Man” is one of the better-known Irish tunes on this side of the water, where it is usually called “The Red-Haired Boy”. I learned this version from Jerry Ricks when we both lived in Turin, Italy in the early 80’s. Jerry, besides being virtually the only black blues musician of his generation to learn directly from old masters like Son House, Skip James, and John Hurt, was also close to Doc Watson in the years when Doc first began touring, and he learned many of Doc’s flat-picked fiddle tunes, several of which I converted to fingerstyle.
The setting of “Sandy River Belle” is from the fiddling of Buddy Pendleton, whose definitive version was on a great old County LP called “Virginia Breakdown”. Like “Beggar Man”, “Temperance Reel” and “The Green Fields of America” are both widely-known in the States, and these versions are certainly more Appalachian than Irish. I recorded a version of the former on my first LP in 1975 but later changed the B section to conform more to standard settings. I learned this from a recording by a hammered dulcimer player named Chet Parker.
Banjoist-fiddler-guitarist-singer-collector Art Rosenbaum taught me “The Green Fields of America”. Art was along for the first trip I made to England in 1976 – a tour organized by Stefan Grossman that also featured Happy Traum. I recall that Art found out from Tony Engels that there was good Irish music to be heard within walking distance of Stefan’s house in Parson’s Green. We made our way to a pub called the White Hart in Fulham Broadway, where I was to hear dozens of sessions over the next few years (after I moved into the flat Stefan had occupied – the tenant in between us was singer Sandy Denny), and listened to an excellent group that included the accordionist Raymond Roland.
Many of the players who were regulars at the sessions there were on a record called “Le Cheile”, which is where I first heard the tune called “Swedish Jig”. I suppose that the group’s fiddler, Danny Meehan, who was a Donegal player, had brought the tune over. It was part of the great Donegal fiddler John Doherty’s repertoire, though Doherty called it “Arthur Darley’s Jig”. Darley, apparently, was a Dublin musician who spent time in Donegal. Whether he actually wrote the tune, and why it is called “Swedish” are mysteries to me. Many years later, I was visiting a friend from those Fulham days, Maggie Boyle, who told me that Raymond had died, and showed me the beautiful air that he would occasionally play, called “Oliver Goldsmith’s Lament”. Not having read Goldsmith, my version is more of a lament for Raymond. I understand that the tune was written by another London-based Irish accordion player named Seamus Shannon (whom I have yet to hear).

I learned Carolan’s charming “Charles O’Connor” from Andy Gavin’s recorded version; this is the kind of liberal interpretation that results from hearing a tune and trying to remember it without access to the notes or recording. “The Blackbird and the Thrush” is one of the least-known tunes here; I learned it from a fine Belfast musician named James Smythe, with whose band I shared a couple of evening’s billing at the Fringe Festival around 1980. James told me that he had learned it from either his grandmother or his mother, and I still remember how beautifully he played this tune on the zither. “The Bonny Bunch of Roses”, on the other hand, is quite a famous song, though this version of the tune is somewhat unusual. I learned it from O’Neill’s collection. (The airs in O’Neill’s are largely neglected, for some inexplicable reason.)

It’s a long time since my last solo record that was devoted (primarily) to Irish tunes, though I’ve contributed tracks to several anthologies in that time and had the opportunity of recording a duo CD with the outstanding County Galway fiddler,
Kieran Fahy (also available on Day Job Records). I hope the inclusion of a few American pieces doesn’t go against the grain.

I realize that many people these days regard Irish music as part of “Celtic” culture, and marketing compels us all to use a term that draws attention away from the very direct links between American and Irish traditions in favor of a supposed relationship between Irish and continental European musics. (Exactly how this can be true of peoples who had no contact for well over a thousand years before the musics in question began to take shape is a mystery, but never mind.) For my part I heard American old-time versions of Irish tunes long before hearing Irish musicians, and have always thought of my playing as old-time, albeit heavily influenced by the Irish and Scottish musicians I have listened to and learned from, on recordings and especially live. Thanks to all of them, and to all the traditional musicians whose mad love keeps the music alive.