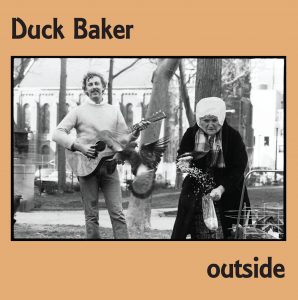 Available to buy from the Online Store

The tracks here that were recorded in Calgary had their genesis in my meeting Eugene Chadbourne in Toronto in September of 1975. He was performing there and I happened to be passing through so we got together and did some informal playing, which was exciting for me as I had not at that point encountered other guitarists who were playing free music. The following year I drove through Calgary to visit Eugene and also met another fine guitarist who was living there at the time, Randy Hutton, and in 1977 Eugene set up some gigs for the three of us, and we recorded a piece of his called Two Peafowl which he released as one side of his GUITAR TRIOS LP.
As I remember, I also made two more trips to Calgary during the next couple of years, the last after Eugene had moved to New York (in 1978). On that last occasion I did at least one concert with Randy, and we did some things in the studio, too. I have a feeling that White With Foam and the improv Shovelling Snow may date from that occasion, but there is no way to be certain. Likewise, the two duos with Eugene may have been recorded at the same time as Two Peafowls or on another 1977 trip. I’m not sure why he never released these himself, not only because I like the performances but because the writing is excellent, and I am not aware of him ever having returned to these pieces.

The London tracks were recorded as a demo very shortly before I left London in 1982 after living there for 3 or 4 years. I very much wanted to record some of my contemporary pieces and was also interested in a label for the straight fingerpicking style I had been releasing with the Kicking Mule label; that association had run its course a year or two earlier. Hence the inclusion of tunes like Holding Pattern and You Are My Sunshine. I had already recorded a version of Southern Cross on a record called THE ART OF FINGERSTYLE JAZZ GUITAR, but I may have wanted to do another for a dancer who liked it and had talked about using it (I worked with modern dancers regularly at the time). That same record also included a version of White with Foam.

Klee shows the effect working with Eugene had had on my thinking, both in terms of composition and some of the extended techniques, like the percussive effects and the squeaking. I did write other things that reflected both Eugene’s and John Zorn’s approaches (we were all working together by late 1978), but those were group pieces. never recorded and long lost. Like Flies was written for a friend from Richmond, VA, Bobby Fussell, a genuinely wild young man who met an early end. Even at the time it had a feeling of inevitability, though the sudden loss of vital people is always shocking, especially when they are still in their 20s. No Family Planning would have had a different working title in those days; it gained this one many years later when I added a bridge to play it in a quartet setting.

I wound up living in Turin late 1982, and not long after moving there I met someone at a club in Florence who was putting out free jazz records, but I no longer remember either his name or that of his label. In any case I recorded another demo at the studio of a friend named Ettore Ciampincio, but by the time I had sent them to the record producer he was out of business. In addition to revisiting the four modern pieces I had recorded in London the previous year, I also got a take of a tune called Breakdown Lane (which is what they call the hard shoulder beside the road on some New England motorways). This is another one that gained a B section many years later, and which I still perform with a group.

Most of the other material here has not been in my repertoire for many years, but I did record versions of Holding Pattern on subsequent records and Peace on a CD that was released in 2009 on The Mighty Quinn, called EVERYTHING THAT RISES MUST CONVERGE. But in the 1980s, the only recordings I made were two relatively straight fingerstyle records for a tiny West German company, and a collection of traditional Christmas music called THE SALUTATION.

By the 1990s I was living back in Virginia and the only modern gigs I was doing were on occasional trips to New York. That began to change after John Zorn asked me to record a CD of Herbie Nichols tunes. which led to some very intense collaborations with Roswell Rudd and others. And when I moved back to London in 2004. I was able to renew my contact with the world of free jazz and improv on a basis that was at least a little more consistent. But there’s no escaping the fact that most musicians sound different when they are young adults than they do when they are moving out of middle age, and I am very pleased that some record now exists of what I was doing in this music in those days. I put a lot into it and it did frustrate me at the time not to be able to get it out there.

The photographer is Robin Moyer, a pretty amazing character whom I knew when we both lived in Philadelphia in 1978 – the place and date of the picture. Robin was a photojournalist dating back to Vietnam days, one of those guys who maybe got the bug even to the extent of kind of enjoying the danger of those assignments rather than the mundane routine. But he eventually got lassoed by a stunning Filipina model and has been based in Manilla since around 1980.

Last time I saw him he visited me in London when he was over on assignment, taking pictures of the royal wedding. He and the other international photojournalists thought that whole set-up was a ridiculous waste of time and energy; it’s amusing to imagine them being ushered around the parade route in front of all the crowds of suckers who had lined up for days, loudly cracking wise about what bollix it all was. I did take him to hear a great Irish music session in Fulham
Broadway, I recall, so at least he got something out of the trip.