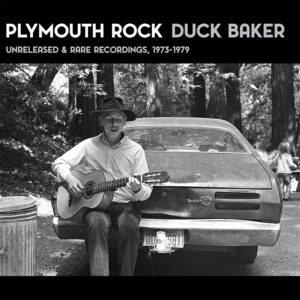 This album is a companion piece to Les Blues Du Richmond, a collection of unreleased and rare recordings that was released in 2018 by Tompkins Square. Les Blues was drawn from a demo tape I made in 1973 and from outtakes from sessions recorded for Kicking Mule Records, later in the 1970s. Material from the same sources that couldn’t fit on Les Blues has been collected here, along with live recordings from two radio shows done around the same time. The main criteria that determined which of the Kicking Mule tracks were excluded from Les Blues was whether I recorded the tunes again later, so that that record includes many pieces that don’t appear on other Duck Baker records. Zebra Blues, on the other hand is mostly material that was recorded again, but with some differences. In some cases (eg “America the Beautiful,” “Sheebeg and Sheemore”) the arrangements are slightly different from versions on early Kicking Mule records. On most of the other tunes, the improvised sections are of course different from other released versions. And all four of the vocal tracks are also different from versions on other records in basic ways: these is my only studio vocal recording of “Dr. Jazz,” for instance, and my only recording of “Right Or Wrong” was from many years later with Molly Andrews on vocals, and played in a different key.

Some people prefer the recordings I made as a young man to anything that followed, and it is with them I mind that this material is being released. It reflects the kinds of things pickers my age were getting into in the 1970s as we tried to expand from the folk/blues/ragtime framework of the ‘60s, mixing in western swing and swing jazz songs, Appalachian fiddle tunes, and Irish dance music and harp tunes. The rhythmic accent that we associate with ragtime, with strong accents on the second and fourth beats of the measure, was really pronounced in my playing in those days, more than it would be later. It’s interesting for me to revisit these recordings because they reminds me of so many things; like the many sessions I had at Blue Bear Studios in San Francisco, and those in Livingston Studios in London. As for the radio recordings, I only played “Blueberry Bill” Hood’s show in Minneapolis a couple of times when I lived there is 1976-77, but I remember the show was taped at some awful hour like 8 AM, and that he had a small studio audience on hand. The version of “Indiana” here is from another live radio broadcast, most of which was in duo with the great fiddler Frank Ferrel, who was based in Seattle in those days. Hopefully some of the duo playing can be included in a future release in this series.

Only two of the instrumentals here were originals. One is the closing “Zebra Blues,” which I wrote in 1974. It took its title from the police code name for a series of brutal attacks that took place in San Francisco around that time. “Plymouth Rock,” was a souvenir from my days playing in rock bands in the ’60s and named for the 1970 Plymouth Duster I was driving in 1975 when my first Kicking Mule record came out, which is seen in the cover photo taken by my old friend, Dix Bruce. We were doing a photo shoot and thought it would be funny to pose by my beat-up car. I guess we thought it was a “statement” of some sort, though I can’t quite remember what.

I had some memorable adventures with that vehicle, including the trip I made in the summer of 1975 while living in Boulder, Colorado. I was playing music on the streets of Denver to survive, usually with Dan Sadowsky and often also with Tim O’Brien and Duane Webster, who were all members of the Ophelia Swing Band. We had heard that we could do well playing on the streets of Aspen, so we piled into my car, with Tim and Duane in the back seat with Duane’s stand-up bass across their laps and the headstock sticking out the window. We then drove the 200 miles up to Aspen with barely enough cash to pay for gas and no idea where we would sleep that night. (Do kids these days still live in such a crazy way? I hope so!) We set up and started playing but before long a cop came along and told us almost apologetically that we could play for tips but had to be very low-key about it, because of a recently passed ordinance against busking. We could leave the guitar case open for tips but couldn’t pass the hat, which cut into our earning capacity considerably.

Anyway, we made enough to buy some food, and then found our way to a bar where the bluegrass band Country Cooking was playing. Tim sat in at some point, so that was him meeting banjoist Pete Wernick for the first time, an event that led within a couple of years to the forming of the band Hot Rize, which was to make such a mark in the decades that followed. Meanwhile, back in the lounge of the Aspen Holiday Inn, Dan was making friends with a Texas oil heiress who was looking for adventure, and Tim, Duane, and I were asking if anyone might have a place we could crash. We were rescued by songwriter John Sommers, who had authored a couple of hits for John Denver, and was in the process of building a big new house that was, as yet, unfinished and hence unoccupied. John kindly let us sleep on the floor in his new abode-to-be, and I remain grateful to this day for the fact that he had gotten as far as installing thick carpeting. Three days later we were back in Boulder and poor as ever, though when Dan’s pretty friend from Texas followed along, things did ease up for one of us, for a few months, anyway.

For the next few years I was taking a couple of round-trip cross-continental tours annually in that Duster, and after I moved to England in 1978, I kept it parked in Virginia and continued to use it for US tours. By 1980, it had acquired a mismatched door on the driver’s side that wouldn’t open along the prescribed lines. The last act came during a trip to New York in August, 1980 to play a free music gig in Wayne Horvitz’s loft, along with Eugene Chadbourne, Polly Bradfield, and John Zorn. On the way out of town, I agreed to drive John and most of the copies of his new LP (Pool, just out on the Parachute label) so he could leave them with his distributor. As we were heading uptown on Broadway, we had gotten as far the mid-20s when there was a loud clang, followed by the sound of something being dragged along under the car. So I stopped in the middle of Broadway, asking John to open his door and see what had happened (since it was complicated for me to perform that task), and just as he was saying “Oh man, Duck, you’re not going to believe this!” several people on the sidewalk were yelling “GET OUT OF THAT CAR!!”, which we did tout suite. What was dragging under the Duster was the gas tank, which had fallen away from the rusted-out underside, and sparks from the friction of the dragging had caused some of the leaked gas on the outside of the tank to ignite – the whole thing could have blown up at any moment! So the cops came, stopped traffic on half of Broadway, and called a firetruck, and the firemen ran their hose from the hydrant, put out the flames flickering on the surface of the tank, and hosed off the street as well as the car and tank, which they broke open. John then got his boxes of LP’s out of what was left of the trunk and hailed a cab while I called for a wrecker to tow away the remains of the car, then took the subway over to Penn Station.

All in all, that trip to NYC was not a big money maker except, perhaps, for any rare record dealers who might have learned in later years that about 200 copies of the original pressing of John Zorn’s Pool were lost to water damage. We came very close to taking the concept of “flaming youth” too far, that time…