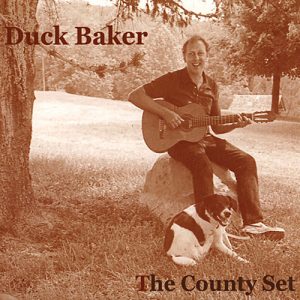 Available now from the Online Store.
Click the button below

My first record, There’s Something for Everyone in America, was recorded for the Kicking Mule label in 1974-75 and released in 1976. One of the co-owners of that specialised guitar imprint was Stefan Grossman, who was based at that time in London, and one of the big perks of being associated with the label was that Stefan would often set up Kicking Mule tours in the UK, that featured guitarists who had recorded for KM. By late 1978, I was living in London, myself, and in all I made four more Kicking Mule records by 1980, which got me spoiled, in a way; certainly I have never again been signed to a label that wanted a record from me every year. But by late 1982, Kicking Mule was winding down and I was living in Italy, where record label representatives weren’t beating down the doors of expatriate American fingerpickers. The frustrating thing was that I was still touring quite a bit and still arranging and composing plenty of new material, but I only managed to make one LP during the rest of the 1980’s, though a couple of new projects did come out on cassette. It wasn’t until CDs and a new decade came along that I was able to start producing records again with any consistency at all.

The first 13 tracks here are released for the first time, and date from a 1985 session that was recorded by Robin Morton at Temple Records in Midlothian, near Edinburgh. Initially the plan was for Temple to release the record, then for various reasons we decided that it should be pitched elsewhere, but there weren’t many possibilities and no one bit. Besides solo versions of some of the new pieces I was writing, we thought it would be fun to do things with other musicians, and that turned out to mean two tracks with the great Scottish fiddler Brian McNeill and two with saxophonist/clarinetist Dick Lee and bassist Jerry Forde.

The two trio pieces would be revisited on The Waltz Lesson (which features the trio I have worked with since 2006), and the tunes played with Brian have also turned up elsewhere, but of course his presence adds considerable interest. Allegheny County was written by my old friend Dan McCorison as a flat-picked tune though it sounds very much like a fiddle tune (not entirely unrelated to Sugarfoot Rag, in fact). It was on my first record and a big feature for me in those early days. I have occasionally revisited it over the years. I learned Sergeant Early’s Dream from Pat Kilbride, and Robinson County from fiddler Frank Ferrell; both are superior settings that were great fun to arrange.

Of the nine solos, seven were remade on CDs that came out in the 1990s. Only Solace, Thursday the 12th, and Thelonious Monk’s Misterioso were not revisited. But there are a few differences in the versions heard here and on the later records, like the little variation between the A and B sections of The Dirtman Cometh and the phasing effect Robin couldn’t resist adding to this version of Old World. This piece, by the way, was very much inspired by traditional African music of various kinds, while The Cure, The Dirtman and Thursday the 12th are blues tunes with modern elements.

The rest are jazz tunes of different sorts: Lefty and Me has an old-time jazz feel (the title was provided by David Hughes, and I must say it fits, for some reason), Baker’s Dozen is bebop, Friday more like hard-bop, and He Who Waits reflects the influence of pianist Abdullah Ibrahim (aka Dollar Brand). Letter To Davey was an homage to Davy Graham that conformed to the spelling of his name he was using at that time, written in the soul-jazz style he mined so effectively over the years.

One of the cassettes referred to above is included here (except for one track). It was recorded in 1985 for Edition Collage, a short-lived label based in Hildesheim, near Hanover, and called You Can’t Take the Country Out of the Boy (the title, derived from an old saying that begins “You can take the boy out of the country but…” has been used by others since then). The record focused on the kinds of country music I was performing in those days, which included fiddle tunes, western swing songs, and my own New Song of the South, a jaundiced look at the region that only a native could have penned. There had been a version of Silver Bells on that first Kicking Mule record, and I did record Maybelline, Make Me A Pallet, Blackberry Blossom / June Apple, and Midnight on the Water again for later projects, but most of this material was not revisited on record, mainly because I have focused more on other styles in the decades that followed.

My version of Silver Bells owes to recordings both by Western Swing king Bob Wills and New Orleans trombonist Jim Robinson, and Maybelline, of course, is from Chuck Berry, a souvenir of time served in rock bands as a teenager. Both Make Me A Pallet and Let the Mermaids Flirt With Me come from the repertoire of John Hurt, the latter having been written by W. E. Myers, who sent the lyrics to Hurt in the late 1920’s. At the time of this recording, I used to see a lot of Jerry Ricks, who had known Hurt well in the 1960s. Jerry was also close to Doc Watson, and it is from Doc via Jerry that the settings of Blackberry Blossom and June Apple were passed along. Jerry also taught me the shape-note hymn I Shall Arise and Go to Jesus, while Midnight on the Water is another one that I got from Frank Ferrell. This great tune comes from Texas fiddler Benny Thomason, and was written by his father and uncle. I learned the other fiddle tune here, Pappy Taylor’s Hornpipe, from the first LP by the very fine revivalist old time band, the Indian Creek Delta Boys. The only original tune of this session was the blues, The Mighty Midget, which reminds me, in places, of the kind of blues tunes old-time and bluegrass fiddlers like to make up. Finally there’s Grandfather’s Clock, which I would have heard growing up, and included because my Dad always liked it. It was a pretty standard piece for fingerpickers in those days.