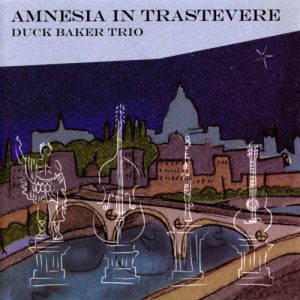 Most of the tunes here were written first as guitar solos. My aim over the years has been to adapt the techniques of American fingerpicking as developed by blues and country players to jazz material.

This is a somewhat different proposition from adapting classical guitar techniques to the same end, mostly in that it tends to lean quite heavily on the use of bass lines. In blues, country and ragtime fingerpicking the thumb usually plays an alternating bass pattern, somewhat as ragtime or stride pianists would do with their left hands. For modern jazz, it is more useful to just use half-notes, but the independence of the bass line remains fundamental. This is true in playing a set arrangement, but the aim has also been to be able to improvise this way.

In a small group situation, this approach creates some amusing possibilities, as both bass line and melody can be either doubled or harmonized. This happens on three of the tunes here: “Good Intentions,” “The Bachelor’s Waltz” and “Night Shift.” All three have been recorded as solos, the former in 1979 and the other two in the 1990′ s. “The Tao of Swing,” “Opening the Eyes of Love” and “Amnesia in Trastevere” also appeared as solos in the go’s. “Ode to Jo” and “Keep the Faith” were both composed with this trio in mind, and “Shiftless” is another expanded solo, though this is its first recording. Monk’s “Jackie-ing” seemed a good way to fill out the program. When I was playing this one with Roswell Rudd, he pointed out that it’s actually based on “When the Saints Go Marching In,” making it the only example of Lydian Dixieland this writer has encountered!

Three titles might warrant a little explanation. “Opening the Eyes of Love” is a reference to the maxim that love is blind, and “Ode to Jo” is, of course, a resetting of Beethoven’s “Ode to Joy.” Since this version basically just eliminates the eighth beat of the original melody, it seemed fitting for the new title to eliminate the eighth letter. “Amnesia in Trastevere” refers to a section of Rome I used to spend time in, and specifically to a period in the late 80’s when I hung out a bit with the great beat poet Gregory Corso. Corso can fairly be said to have represented two extremes of beathood, erudition and self-destructiveness, as well as anyone. The title is lifted from his poem “Amnesia in Memphis,” and was inspired in part by something Gregory said in a rare moment of confidence: “You know man, what it’s really about is, you want to live your life in a way that you don’t always wake up with all these terrible memories!” Some time after composing the tune I also wrote lyrics, which I include in case anyone knows a singer.

BY THE RUINED HILL, OLD CAESAR LINGERS STILL
SINGING OF HIS CONQUESTS AND GLORIES
SO ENTHRALLED WE ARE, AND FROM OURSELVES SO FAR
LIVING OUR OWN LITTLE WAR STORIES