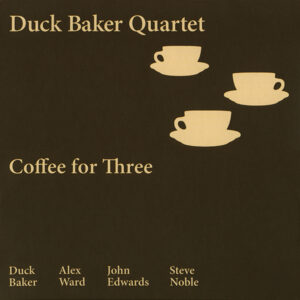 “Coffee For Three” and “Song For CH” are part of “Pareto Sketches”, a collection of Duck Baker compositions commissioned in 2014 by L. S. (an Italian patron of the arts). All titles published by Fruia Muska except “Always” by Shining Shadows.

Graphics and design by Scott Friedlander

We all know that comparisons are odious but, at the time the CD-R of this recording arrived in the post from Duck Baker, I just happened to be listening to Sonny Rollins’ 1962 quartet with Don Cherry, Bob Cranshaw and Billy Higgins.

Perhaps, after all, some comparisons are less odious than others. In which case, I will continue.

For a start, these are both quartets, with double bass and drum kit. One reed instrument. Each band can change direction in a micro second. Both have had wit and charm. Both play fab tunes, and sometimes insert other tunes in those tunes. Both possess endless improvisational skills, versatility, enthusiasm, taste, boundless energy and both are definitely a lot of fun.

It’s just that there is 56 years between the two recordings. And all four players on this one know what’s been going on in those years. In fact, they’ve been central to a lot of developments.

Duck’s CD (and now LP) of Herbie Nichols tunes was greatly admired by the late Derek Bailey, who, probably not coincidentally (“PNC”), was the mentor of Alex Ward when Alex was still at school.

Alex, PNC, is also a brilliant guitarist. At the last count he has appeared on several kerjillions of recordings, often with Steve Noble and John Edwards, who in turn have also got kerjillions of releases with other people.

All the tunes here are by Duck. (One day someone will do a whole album of his compositions. (Maybe a piano player?) Many of his tunes possess the relaxed melancholy you might associate with Herbie Nichols’ work.

On this CD, tracks 3 and.6 are a good examples. (‘Song For CH’ is a requiem for bassist and composer Charlie Haden, by the way, whose most famous piece is ‘Song For Che’).

Both pieces called ‘Vorpml Xetrov’ are brilliant examples of how, as Evan Parker has said, “improvisation is a process that defines its own form”.

PNC, a comment by Billie Holiday just went viral (which means it will be forgotten by the time this gets released) but as it’s one of the best explanations I’ve ever seen of what’s important about music, I’m going to  shamelessly appropriate it: “No two people on Earth are alike, and it’s got to be that way in music, or it isn’t music”.