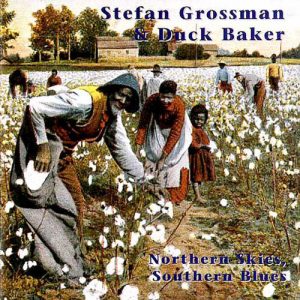 It was about time. Duck was in Virginia and I was holed-up in New Jersey surrounded by snow, snow and more snow. The idea was to get together and do a “meat and potato” record of solid guitar duets that would reflect our musical roots, i.e. country blues, ragtime and jazz. I’ve known Duck for years – well over a quarter of a century. We have played and recorded throughout Europe, America and Australia. We have performed duets on concert stages and have guested on each other’s solo recordings. And now it seemed “right” to book studio time and focus on a duet project. I called Don Sternecker at Mix-o-Lydian Studio, just a stones throw from my home, and we arranged for a week of recording in the white winter hills of New Jersey. Duck drove up from Virginia and we spent a few days deciding on songs and rehearsing arrangements.

The instrumentals we picked were a combination of favorite old tunes and themes as well as a variety of styles and techniques. We wanted each number to be arranged but also have space for improvisation. It was very important for us to create distinct arrangements that had each guitar complementing, harmonizing and interweaving. We were greatly influenced by the playing and music of Big Big Broonzy, Blind Blake, Rev. Gary Davis, Sam McGee, Elizabeth Cotten, William Moore, Lonnie Johnson, Frank Stokes, Skip James, Son House, Willie Brown, Charley Patton, Jelly Roll Morton to name a few! But we were also searching for our own sound and approach. I hope you have as much fun enjoying this CD as we had in making it. 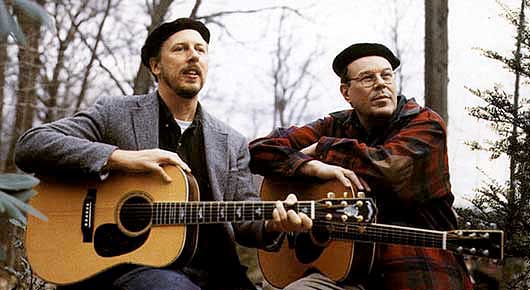 William Lee Conley Broonzy, better known as Big Bill Broonzy, was one of the most popular artists in the history ot the blues. He began recording in 1927 and continued until his death in 1958. He was a Mississippi bluesman who travelled north to Chicago and lead as well as followed the trends in blues through the decades. He was very active during the folk revival and ironically his playing seem to go in a complete circle performing going back to his early blues of the 1920s. He was very influential amongst guitar players and his arrangements in the keys of A and E are very distinct. Big Bill’s Shuffle is played in the key of A and combines many of Broonzy’s licks and runs.

I first heard this gospel tune in 1964 performed at a store front church in Harlem by Rev. Gary Davis. Over the years I have tried to arrange this beautiful melody in different settings. I ended up in an open G tuning (D G D G B D) playing in a Mississippi John Hurt style with licks from Memphis Minnie and some left hand fingerings from Chet Atkins. Duck adds a complimentary accom-paniment that brings out the melody as well as improvising on the theme.

An original two part instrumental squarely rooted in the playing of Lonnie Johnson with memories of King Solomon Hill. Lonnie was the ‘governor’ of blues in D and I have tried to incorporate many of his trademark lines in my playing. The guitar is tuned to a dropped D tuning (D A D G B E).

BLUES FOR THE MANN

My friend Steve Mann used to play a version of this instrumental. It is loosely based on the music of the great blues pianist, Leroy Carr who recorded from 1928 to 1935. It is a straight-ahead attempt to recreate a piano blues to fingerstyle guitar. I have added several phrases, licks and sections that come from sources as varied as Rev. Gary Davis, Robert Johnson, Blind Boy Fuller to the chromatic banjo playing of Bill Keith. Duck complements each phrase with harmonies and counterpoint lines as well as going to town on his solos.

Originally recorded by William Moore in 1928 for Paramount Records. Moore was a barber in Virginia and his records echoed the influence of Blind Blake. I am playing in a dropped D tuning (D A D G B E) capoed to the second fret while Duck is playing in the key of E in standard tuning. This is a two part composition. For the first section our guitars are closely arranged while the second section offers a more rhythmic setting

This slow blues in C begins in a Blind Blake mood reminiscent of his Early Morning Blues and then heads to New Orleans for some Jelly Roll Morton piano licks and then back to the Carolinas for a taste of Rev. Gary Davis. Duck joins the fun with harmonization and counterpoint lines. His improvised solos are played in a traditional jazz setting.

Originally recorded by Willie Brown in 1930 for Paramount Records. Willie was a close friend of Son House and recorded and performed with both House and Charley Patton. We play this blues in E in first position. We elaborate on Browns basic arrangement by adding other Delta licks from Patton’s Pony Blues and Tommy Johnson’s Bye Bye Blues.

BACK HOME IN INDIANA

One of the old great standards given the unique Baker touch. Duck introduces the theme with a fingerstyle arrangement and then improvises using fingerpicking techniques. He then adds a contrasting rhythmic chord break. All in all you visit Indiana via its highways and byways.

What more can be said about this cornerstone of fingerstyle guitar. Eliza beth Cotten made this tune her own and it has been played by thousands of guitarists since the early 1950s. Every so often it even makes the hit parade! It was a standard in the English skiffle scene and The Grateful Dead performed it in concert during their career. We had fun putting together our arrangement.

A children song written by Elizabeth Cotten. She performed this with a simple strum accompaniment. I arranged it for fingerstyle guitar combining many styles and techniques. Duck adds a second guitar part that complements the basic arrangement. We added a second section in a Blind Boy Fuller blues in G vein.

The 1927 to 1929 recordings of Frank Stokes and Dan Sane as the Beale Street Sheiks presented great folk tunes with exciting guitar duet arrangements. Stokes would fingerpick the tune while Sane drove the rhythm with walking bass lines. In our arrangement I take on the Frank Stokes persona while Duck pretends to be Dan Sane. We have added a second section to this well know blues.

Take a little drop of Blind Blake and add some Big Bill Broonzy and Rev. Gary Davis and then rag in the key of C. I begin this piece trying my best to play Blake’s arrangement and then try to expand on it.

Sam McGee “from sunny Tennessee” was a well known and popular performer and recording artist of the Nashville scene from the I920s until his death in the early 1970s. He accompanied Uncle Dave Macon on the Grand Ole Opry as well as on recordings. His fingerstyle techniques were based in black traditions. His Buck Dancer’s Choice has been a favorite for generations of guitar players. Not as well known is his Franklin Blues but it is just as enjoyable to play.