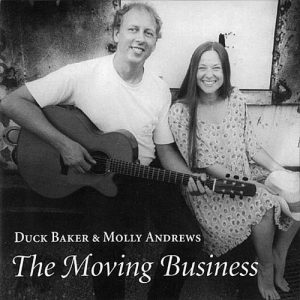 The You and Me That Used to Be was the title of the last record made by the great Jimmy Rushing, the first and definitive vocalist with Count Basie’s Orchestra. This is one of those songs we knew we wanted to learn the first time we heard it.

This version of Sittin’ on Top of the World comes from Doc Watson, and it’s surprising that it isn’t done more often. Perhaps the D tuning—a hard one to get in and out of—has to do with it. What is there to say about Doc—a true inspiration on so many levels as a musician and as a human being. (Guitar: D, A, D, F#, A, D)

J. A. Mainer made a lot of records, but the one on Starday is a real classic. Run Mountain, Chuck a Little Hill is the song the bluegrassers love to cover from that record, but we think I’m Not Turning Backward is a great song that deserves performance as well.
(Guitar in drop D: D, A, D, G, B, E)

The versions of Blackberry Blossom and June Apple heard here were learned from Jerry Ricks, who learned them from Doc Watson. This Blackberry was Uncle Charlie Higgins’ before Doc’s, while June Apple originally came from the repertoire of Henry Reed.

Nottamun Town is an ancient English song which seems to have survived only in Appalachia, where Cecil Sharpe collected it about a hundred years ago. In recent times it’s gone back to being more popular with English than American singers, but Molly learned it from a record by Jean Ritchie, whose family handed it down in Kentucky. The “non-sense” here is at times like that of Shakespearian fools. (Guitar: D, A, D, G, A, D)

The March of the King of Laois is very old, as the 3/4 tempo—not to mention there being a king in Laois—indicates. This was learned from a Sean O’Riada recording and may be the first ever version of an Irish war pipes tune arranged for lap dulcimer and fingerstyle guitar. (Guitar: drop D)

That Twenty-Five Cents That You Paid was written by Jim Garland about strip mining. There is little to add to this story, other than to mention that the coal companies involved didn’t so much as pay more than token taxes to the states they raped, and the perpetrators are, as of 1994, considered as great American families.

It may seem to strange to say that a figure as well known as Ray Charles is underrated, but that’s how we feel about him. His Atlantic recordings from the late 50s to early 60s constitute as great an achievement as we have, whether your frame of reference is Bill Monroe on Columbia, Charlie Parker on Dial, or Beethoven’s Last Quartets. Carryin’ That Load is an obscure title but typical of Brother Ray’s secular gospel style.

This version of Deep River is a hybrid, owing something to a version learned from Jerry Ricks, and something to Louis Armstrong’s cover (Dear Old Southland) as well as to the richly harmonic style of the Fisk Jubilee Singers. They introduced it, along with virtually every other spiritual that’s well-known today, on their tours shortly after the Liberation.

Nighttime in Nevada is an irresistible bit of Hollywood corn, far preferable to the fast-food that Roy Rogers serves up nowadays. We got this from erstwhile Carson City native Stan Poytross. (Guitar in drop D)

Carmen Baker used to sing her grandchildren to sleep with I Want to Wake Up in the Morning Where the Morning Glories Grow and Mammy’s Little Coal Black Rose. I have met other people who heard the second song the same way but never this one. I would love to hear from anyone who knows it, especially since I don’t remember the words! Its inclusion here is dedicated to the other Baker kids—Linda, Lucy, and Tom.

Bad Girl comes from a recording by the great Virginia singer Texas Gladden. This song is clearly related to several others, most notably Streets of Laredo and Dying Crapshooter’s Blues but its imagery is even more poetic.

We learned Searching for Lambs from a book by Maud Karpeles, and suggest it to anyone who thinks of folk songs as being “simple ditties,” as well as anyone who is overly concerned witb “Celtic” music to tbe exclusion of all things Anglo-Saxon. (Guitar: D, A, D, G, C, F)

River Blues was evidently a song of some popularity in the 1930s, tbis version coming from Bill Boyd and His Cowboy Ramblers (what a band!). This has to be the happiest treatment of this subject in existence.

Train of Life is almost tbe opposite of most Roger Miller songs, which are usually wordy, catchy, and light. Maybe that’s why this great song has been forgotten while the eminently-more-forgettable You Can’t Rollerskate in a Buffalo Herd hasn’t. We got this from a Merle Haggard record.

We would like to thank Tim O’Brien, Michael Crane, and Wayne Henderson as well the sources already mentioned for help in preparing the material and these notes.

This record is dedicated especially to Jerry Ricks and Hal Hughes, and to all other musicians who dedicate themselves to the tradition without receiving the appreciation their music deserves.