Two highly accomplished solo guitarists, Duck Baker and Jamie Findlay, have developed a new approach to playing jazz guitar duos. Concentrating on tunes written by great jazz composers from Fats Waller and Duke Ellington to Charlie Parker and Thelonious Monk, Baker and Findlay combine their talents for arrangements of complexity and sophistication without ever losing a basic swing and sense of fun that is obvious to audiences at home and abroad. This is state-of-the-art acoustic guitar work that will appeal to jazz fans, guitar fans, and anyone who just likes good music. Reviews of their first record, Out of the Past, have consistently praised the duo’s taste, drive, and variety. Coda, the Canadian magazine known as perhaps the most serious North American jazz journal, went so far as to recommend it “to anyone who just wants to feel better.” 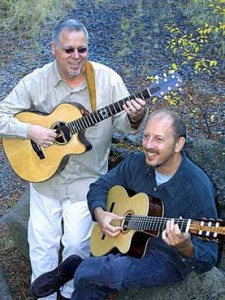 Jamie Findlay is simply one of the best contemporary acoustic jazz players in the world, master of a virtuosic style that is often compared to Ralph Towner and Pat Metheny. He has studied with such giants of modern jazz guitar as Lennie Breau, Joe Pass, and Ted Greene, and is a familiar figure on the Southern California scene. His solo guitar recordings have been well received both at home and abroad. Currently, he is a member of the Acoustic Jazz Quartet, an excellent L. A. based aggregate who in 1999 made an exceptional record for the Naxos label featuring some fine Findlay originals. In addition to his solo career and regular and occasional band work, Jamie is highly sought after by vocalists who value his sensitivity as an accompanist. He has also published numerous instructional books and videos, and regularly contributes columns to guitar magazines.

One of the most highly regarded acoustic fingerstylists of his generation, Duck Baker is best known for his work in the traditional folk, ragtime, and swing worlds. Duck has been compared by Chet Atkins to Jerry Reed, but he has been a dedicated student of jazz and its history since falling in love with Thelonious Monk and John Coltrane records in the mid-60’s. Duck’s interest in all forms of American music from its Irish and Scottish antecedents to free improvisation has been likened to classical musicians who perform repertoire of all periods from renaissance to modern music. In the mid-90’s John Zorn asked Duck if he would like to make a record of tunes written by the great pianist, Herbie Nichols, and the result was the highly acclaimed Spinning Song. This led to a fuller awareness of Baker in the jazz world and ongoing associations with musicians like Roswell Rudd and Michael Moore.