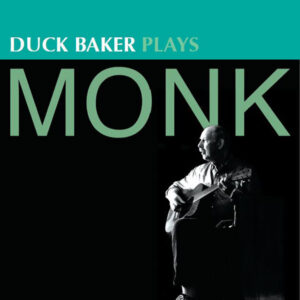 It has taken many years for this project to be realized, but Duck Baker Plays Monk has finally been released by Triple Point Records.

Duck had the idea to release a record of solo arrangements Thelonious Monk compositions practically since the day his CD of Herbie Nichols tunes, Spinning Song, was released, over 20 years ago, but for a long time he couldn’t find a label that was interested. He did most of the recording at a friend’s studio in 2010, but still didn’t have a label until Ben Young and Joe Lizzi at Triple Point got interested about four or five years later. Baker recorded two more tracks to fill out the program in late 2015, and over the course of the past two years things have slowly come together. In addition to Baker’s own notes, liners were also provided by the late Roswell Rudd, the trombonist who, with Steve Lacy, formed the first repertory group to perform Monk’s music that was not lead by the composer himself, during in the early 1960s.

This is one of Duck Baker’s most ambitious recordings, and it is only available on LP. Production values are high and the price does reflect this, but with CD’s becoming an ever-more-difficult economic proposition, there has been a return to the idea of releasing high-quality music on high-quality vinyl, and it is gratifying to see Duck Baker Plays Monk get this kind of treatment. The last time Baker made a solo LP was 32 years ago, and he has learned a thing or two since then! The folks at Triple Point Records think it’s his best record yet, so, if you still have a turntable, why not order a copy and see if you agree?

The LP can be ordered from the Online Store

The record price is £25 (about $35 or €28.50)
Shipping in the UK is £4
Shipping in the rest of Europe is £8
Shipping in the rest of the world is £10
If you would like to have the LP signed, you have only to ask!
Americans who want to order Duck Baker Plays Monk should note that it costs less to order it directly from Triple Point Records (http://triplepointrecords.com/), since they can ship within the US for just $3, about half what it costs to ship from the UK, and it will get there sooner. Of course, they do not have signed copies, though, so if you want that you will have to order from here.
More info and track listing here
Posted in Latest News
Posts