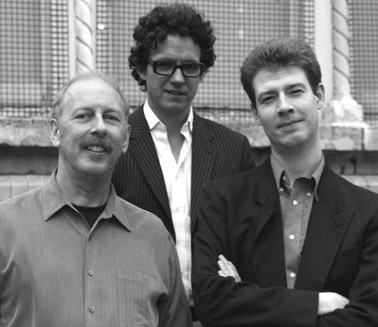 When the well-known American fingerstyle guitarist Duck Baker moved to London in 2005, Steve Beresford put him touch with two younger players who turned out to be ideal trio-mates, Alex Ward and Joe Williamson. Duck had already developed a particular liking for the combination of guitar and clarinet. In part this probably owes a bit to the great things Jimmy Giuffre and Jim Hall did together, but in any case Baker had already worked in a trio with the fantastic clarinetist Ben Goldberg when based in the San Francisco area. He has also performed with a couple of other highly-regarded proponents of the “licorice stick,” Marty Erlich and Michael Moore.

Alex Ward first attracted notice in improvised music circles for his work with Derek Bailey’s “Company” and his duo CD with Steve Noble on Bailey’s Incus label. Subsequently he continued his involvement in the free improv scene, first in Oxford and then from 2000 in London, and has built up an impressive list of musical associations, including Butch Morris, Eugene Chadbourne, Leo Smith, Joe Morris and a host of others. He has been a key member of many of Simon Fell’s most ambitious ensemble projects. He is also a singer-songwriter and guitarist and plays in several rock bands, including his own 2-piece Dead Days Beyond Help.

Joe Williamson hails from Vancouver, BC, studied at Montreal, and by the time he was in his early 20’s, was living in Amsterdam. He subsequently resided in Berlin before relocating to London in 2004. Like Alex Ward, Joe has also compiled an impressive list of collaborations in the improvised music world: Han Bennink, Tristan Honsinger, Alexander von Schlippenbach, Eugene Chadbourne, John Butcher, etc. etc. In 2008 Joe continued his tour of European major cities by moving to Stockholm.

The trio performs a few standards and more than few of the compositions of Thelonious Monk and Herbie Nichols, but the main focus of the repertoire is Baker’s original writing. The style is certainly modern, even edgy, but the music is also accessible to general audiences, owing both to the the strong melodies and a tendency not to indulge in lengthy solos. Baker’s style of presentation, developed over a long career working in folk and blues  venues, is also more outgoing than is the norm for jazz performers.

The trio’s debut recording, The Waltz Lesson, was released in May, 2009 and received glowing reviews in Jazz Times, All About Jazz NY, AAJ – Italy and elsewhere. In addition to club appearances in England, Italy and Sweden, the group has performed at numerous festivals in the UK and Italy, most notably the prestigious Venice Jazz Festival and Le Weekend at Stirling, Scotland. Their second CD is expected to be completed in early 2011.

Sample tracks from the CD “The Waltz Lesson“