From THE ABSOLUTE SOUND

Most acoustic guitarists perfect, or become associated with, a particular genre—Delta or Piedmont blues, for instance, or Celtic, ragtime, or traditional folk (however you define that). Some, like John Fahey or Robbie Basho or Alex de Grassi, create a personal amalgam that becomes an influential style unto itself. 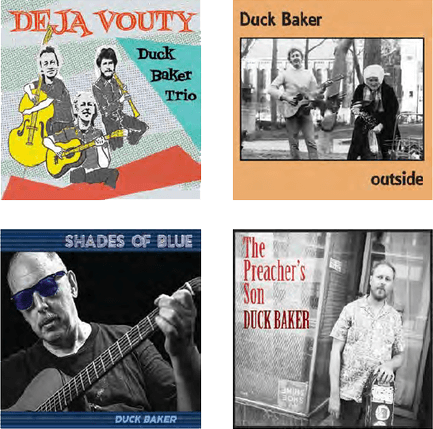 Duck Baker is not like most acoustic guitarists. Between May of 2016 and the end of the year, he will have released at least five new albums—The County Set, Shades of Blue, The Preacher’s Son, Deja Vouty, and Outside—on three different labels, with more albums on the horizon. The music on the new releases ranges from traditional Irish and Appalachian dance pieces to American folk, blues, gospel, Western swing, and Appalachian fiddle tunes owing to Doc Watson, Mississippi John Hurt, Bob Wills, the Indian Creek Delta Boys, and others. Then there’s jazz—old-time, modern, and free—showing Baker’s deep familiarity with swing, bebop, and hard-bop, and referencing everybody from Slim Gaillard and Thelonious Monk to John Coltrane and Derek Bailey.

If you’re scratching your head and thinking you’ve seen the name “Duck Baker” in these pages before, well, you’re right. Since September 2009 Duck has contributed to every issue of The Absolute Sound, the scope of his interests making for memorable writing in both the jazz and rock sections. Often his insights into different genres comes from his experience as a musician. As did many baby boomers of his generation, Richard R. Baker IV, a native of Richmond, Virginia, and now 67, started playing guitar as an early teenager, smitten with rock and roll. He got an electric guitar in 1964 and fell under the sway, he recalls, of “people like Chuck Berry, Lonnie Mack, and Mike Bloomfield (on the first Paul Butterfield record).” But other sounds in the mid-60s air (and on the mid-60s airwaves) soon captured the attention of the budding guitarist.

“This was the era of what Utah Phillips would later call ‘the great folk scare,’” Baker explained in an email from his home in Reading, England. “I heard local kids playing the pop/folk stuff in bands. At some point, I started picking up the basic kinds of fingerpicking patterns that people like Peter, Paul & Mary used, just from watching these local kids. Then I started hanging out in local coffeehouses and meeting slightly older kids who were trying to play blues, jug band music, bluegrass, etc. Before long I was buying records by Big Bill Broonzy, Brownie McGee, and Robert Johnson.”

As a young kid with dreams of growing up to be a “real musician,” Baker knew he should pay attention to jazz and initially gravitated toward the soul jazz of Jimmy Smith and the Jazz Crusaders. It was a piano player named Buck Evans who introduced Baker to earlier jazz: ragtime, Louis Armstrong, Bix Beiderbecke. “Buck was one of those oddballs for whom musical history sort of stopped in the 1930s,” Baker explained. “I think his low opinion of rock contributed to my doing less and less of that, though I was still playing in electric bands up until the time I left Richmond in 1968.”

Also in the mid-60s, Baker started listening to more modern jazz. When he was 16 or 17, he bought Thelonious Monk’s Riverside LP Misterioso. “I did not understand one note on that record but I fell completely in love with it,” he said. He then moved on to Miles Davis and, thanks to a woman he dated and would latter marry, Archie Shepp and Andrew Hill. “Those records just floored me, and from there I progressed pretty quickly to being a hardcore free jazz fan, working through Coltrane, Ornette, Sun Ra, et al. What’s interesting is that I started from the beginning and the end as a jazz listener. When I moved back through to people like Charlie Parker, Lester Young, Duke Ellington, the hard-boppers, and so on, it was a matter of acquiring the taste, at first. But the free jazz and the early stuff spoke to me right away.”

By the time Baker made his recording debut in 1975, for Stefan Grossman’s Kicking Mule label, he had moved to San Francisco and practiced his way into becoming something of an acoustic guitar phenom. (He also started writing about jazz during that period, and has been a freelance music critic ever since.) He was able to integrate guitar influences as diverse as Doc Watson (“The way I figured out ‘Deep River Blues’ was harder in some ways than Doc’s arrangement”), Sonny Sharrock (“As soon as I heard him, I started trying to play like that, and trying to work out an outside style that was more like trying to imitate sax players”), and Chet Atkins (“I wasn’t impressed with the very MOR things I heard him play, but Chet made me feel like you could play any kind of music as a guitar solo”).

And once he brought Irish, English, and Scottish material into his repertoire—after hearing “real” Irish music, first in San Francisco and then while touring the UK, where he hung out in pubs and connected with such guitarists as Davy Graham, Dave Evans, and Dan Ar Braz—Baker established himself as not only a recognized fingerstyle guitar virtuoso, but also as one of the most unpredictably eclectic.

Those assessments are confirmed, many times over, on Baker’s new releases. Taken together, the five albums offer a kind of career overview, with many tracks culled from Baker’s archival tapes of previously unreleased studio sessions and live performances, and two albums’ worth of recent recordings.

On Outside (Emanem), we hear Baker in his most avant-garde musical persona, recorded in Turin in 1983, London in 1982, and Calgary in 1977. All but two of the tracks are performed solo, mostly in a free, snapping, angular, and abstract style. But whereas the original composition “Klee” is a tour de force of extended techniques, Baker’s takes on Ornette Coleman’s “Peace” and the Jimmie Davis-Charles Mitchell standard “You Are My Sunshine” make them vehicles for reflective, almost romantic interpretation, with minimal deconstruction. The album closes with two sometimes furious, grin-inducing duets with Eugene Chadbourne from 1977, bristling with pointillist details, musical sparks flying out of Chadbourne’s idiosyncratic compositions.

The County Set (Southern Summer) is a virtual twofer with a gently split personality. The first half, recorded in 1985, is jazz, comprising original compositions and a cover of Monk’s “Misterioso,” all played solo except for a pair of duets with Scottish fiddler Brian McNeill, and two more with saxophonist/clarinetist Dick Lee and bassist Jerry Forde. Also recorded in 1985, the second half is a set of more or less “country” tunes, and it includes Baker arrangements of such traditional material as “Silver Bells” and “Grandfather’s Clock,” pieces associated with Mississippi John Hurt, and dusky Baker vocals on Chuck Berry’s “Maybellene” and O.W. Mayo’s “Blues for Dixie.” Listen to these 25 performances for a broad introduction to Baker’s liberal employment of “folk” fingerpicking.

As he does with jazz and country, Baker sees the blues not as a narrow track but rather as a wide-open playing field. On Shades of Blue (Fulica), that means not only a variegated repertoire—lots of originals, plus renditions of pieces by jazz composers Herbie Nichols (Baker recorded an entire album of Nichols tunes, Spinning Song, 20 years ago), John Coltrane, and clarinetist/alto saxophonist Michael Moore (Clusone Trio)—but also multifarious collaborations. Although the recording quality of the live and studio performances from 2000 to 2013 is inconsistent, the warm tone and precision of Baker’s nylon-string guitar is luminescent in every setting—trios with clarinetist Ben Goldberg and violinist Carla Kihlstedt, and with clarinetist Alex Ward and either John Edwards or Joe Williamson on bass; and duos with Michael Moore, trombonist Roswell Rudd, and guitarist/steel guitarist Ken Emerson.

For immersion in Baker’s purely solo fingerstyle playing, The Preacher’s Son (Fulica) is hard to beat. Conceived in part as a tribute to Davy Graham, it includes Graham’s “Forty Ton Parachute” and a version of Horace Silver’s hard-bop classic “The Preacher,” a staple of Graham’s repertoire. There are Irish and Appalachian fiddle tunes, a bit of gospel, another version of “Maybellene,” and a couple of other vocals. Although Baker doesn’t do many solo concerts anymore, The Preacher’s Son continues the thread that runs through so many of his recordings.

When Baker performs live these days, it is in the jazz-trio format with clarinetist Ward and bassist Edwards, which brings us to Deja Vouty (Fulica). Of the new releases, this set is the most unified—by virtue of being recorded in one studio with one group, and containing 11 originals, all composed in the past five years. Baker employs varied bar structures and time signatures, and in his liner notes he points out allusions to older jazz tunes and musicians: “Sweet Georgia Brown,” “Buddy Bolden’s Blues,” Benny Carter’s “When Lights Are Low,” Hank Mobley’s “No Room for Squares,” Sonny Clark, and Duke Ellington and Billy Strayhorn. Within this fairly wide scope, however, the locked-in improvising of the trio and the infectious melodic inventions forge a singular identity that is bouncy and fun while complex and occasionally challenging.

On all five new recordings, the soul of that musical identity is Baker’s guitar voice. “I never was trying to sound like any jazz guitarist when I played solos,” he recalled. “I wanted to sound like a cross between Sabicas, Sundaram Balachandar, and Charles Mingus when I was soloing, and maybe a cross between Merle Travis, Blind Blake, and Joseph Spence when I was picking.” Fortunately, we get to enjoy what Baker does sound like on five distinct new albums.