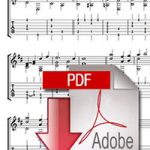 This gorgeous tune was written by singer/songwriter/multi-instrumentalist Tim O’Brien and named for his wife, when both of them were around 20 years old. Duck learned it when he was seeing a lot of Tim and Kit in the mid to late 1970s. He recorded his solo version for Kicking Mule records at the time but it was not released until 1987 when Stefan Grossman released a limited-edition cassette called Both Sides. Baker recorded another version for the 2017 record The Preacher’s Son, and eventually the original version was released on a collection of early recordings called Plymouth Rock in 2019. When transcribing the piece, Duck Baker decided to notate the solo he improvised on the original recording, and since the transcription follows that version so closely it made sense to include an mp3 of that track, rather than a midi version.

This is played in the key of C and involves positions near the beginning the feature a considerable stretch, since the middle G note features in both the melody and the bass line; playing the note on different strings helps to separate the voices in the listener’s ear. Using a capo on the second fret or even higher can make the stretches easier. The B section is also a challenge for students not used to to playing arrangements that feature three voices (melody, bass, and middle).

Duck Baker recorded a duo version of this with Dave Hull on their 2011 record When You Ask A Girl To Leave Her Happy Home, though that arrangement depended on both guitarists playing different harmony parts, and Duck used a high-strung piccolo guitar in standard tuning. Dave played the melody for the B part, and in the course of arranging that section for solo guitar, Baker decided that drop-D made more sense, and was able to transpose his own part for the A section with minimal changes. Since there is no recording of him playing this solo, we are including the midi version generated by Sibelius.

“Lonesome Moonlight” was written by Bill Monroe, so it is hardly surprisng that it is a standard tune in the bluegrass world. Daddy Bill first recorded it in 1964, and his longtime fiddler Kenny Baker waxed one of the most memorable versions a decade later, with Monroe on mandolin.

This is an advanced arrangement, and it takes time to get the notes to ring out clearly, especially on the passages fretted up the neck, but it’s worth a bit of trouble to get a tune this pretty to sound as nice as it can on the instrument.

Midnight On The Water

Over the last few decades “Midnight On The Water” has become one of the most widely performed of all American waltz tunes, and it’s easy to see why. It comes from the repertoire of the great Texas fiddler Benny Thomasson, who recorded it on his first solo LP in 1970, at which point he was in his sixties. The tune was written by Thomasson’s father, possibly with an assist from his uncle, which dates it back to the early part of the last century. By the end of the 1970s “Midnight” had become a huge favorite with not only fiddlers but other instrumentalists, bands, listeners, and dancers. Duck Baker learned it from fiddler Frank Ferrel around 1977.

The version heard here is based on the recording heard on Baker’s 2009 CD The Roots And Branches Of American Music, and again he transcribed his playing fairly closely from an edited version of the recording. This is an advanced arrangement that makes frequent use of embellishments, but the parts that students should focus on are less obvious, like the need for the two D notes played together below the melody in the middle of the first 3 measures of the B section to ring out while the other notes are played. Once the left ring finger is in position for the D on the fifth string on the 2nd beat of that first measure, it needs to stay there until the note changes on the 3rd beat of the 3rd measure. Of course that note is picked with the right index finger, which also comes into play for the 1st 3 measures of the AA variation. That eighth note bass line flows along much more nicely if the index finger alternates with the thumb there, with the thumb playing the notes that are on the beat and the index finger playing those between the beats. This is not terribly difficult, especially in the first 2 bars there, but it takes getting used to, especially when the melody also features eighth notes, as happens in the 3rd measure.

Three waltzes from the Old Time/Bluegrass repertoire that fiddlers play. Of the dozens of American fiddle tunes Duck Baker has arranged for guitar, these are the only waltzes he has recorded. It’s not that Baker has any aversion to the tempo; he plays lots of jazz tunes in 3/4 and has composed dozens of originals in waltz time. But the waltzes in the American fiddle repertoire tend to be sweetly sentimental tunes, and it’s hard to not make them sound sugary on the guitar, in Baker’s view.

The newly added tunes are “Kit’s Waltz” (from the 2019 release Plymouth Rock), “Midnight On The Water” (The Roots And Branches Of American Music, 2009), and “Lonesome Moonlight Waltz” (the 2011 record with Dakota Dave Hull When You Ask A Girl To Leave Her Happy Home)