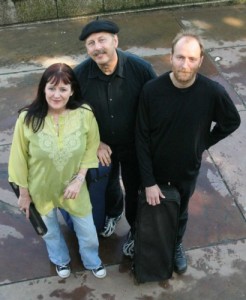 the inspired combination of three great performers whose passion for traditional music and song has sustained them and their audiences for decades.

Drawing on their common sources – the Irish and American traditions – they have come together for a musical celebration of the highest calibre.

Duck Baker, from Richmond, Virginia, is one of the most highly regarded fingerstyle guitarists of his generation. His repertoire ranges from traditional Irish music through old-time mountain music and bluegrass to blues, gospel, ragtime, swing and modern jazz. Baker has a reputation as a virtuoso but his performances depend as much on his humorous and informative stage manner as on technical bravura.

Maggie’s expressive, traditional vocal style – the result of her Irish heritage – has kept her in demand for many years. Since 1984 she has accrued an impressive catalogue of recordings and live appearances, including work with The Chieftains, Rambert Dance Company, Incantation, Bert Jansch, Steve Tilston, Renbourn’s Ship of Fools, plus Hollywood film soundtracks.

“she tackles largely traditional song with a full-blooded ardour that’ll come as a shock to those weaned on the flaky New Age nonsense sold to us as Celtic music through most of the ‘90s” Colin Irwin, fROOTS

Ben has been playing the fiddle music of the USA, Sweden and Ireland since he was six years old. He has toured widely with his father Tom (founder-member of the seminal New Lost City Ramblers) and recorded with Bing Lyle, Mandragora, The Saw Doctors, Murray Lachlan Young and The New Deal String Band. His collection of Swedish fiddle tunes (Swedish Fiddle Music, an Anthology published by Dragonfly Music) has become the standard work on the subject in this country.

“…just about the best folk fiddler of his generation” fROOTS