The Guitar Trio in Calgary 1977 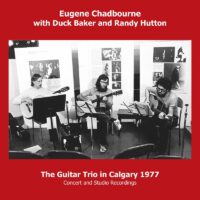 After many delays, Emanem records has released The Guitar Trio in Calgary 1977, Concert and Studio Recordings, featuring Eugene Chadbourne with Duck Baker and Randy Hutton. The studio portion of this was released as one side of Chadbourne’s third LP, Guitar Trios, but the concert recording from the same date has never been previously released. The concert featured trio performances as well as solos and one duo, and the music reflects the influence of both American free jazz and European free improvisation of the time, as well as early steps towards the developments Chadbourne would explore with John Zorn and others when he relocated to New York later in 1977. Guitar Trios was the first recording that documented Duck Baker’s involvement with avant garde music, and this release helps give a fuller idea of how fluent he was with the new language at this point (the 2016 Emanem release, Outside, also included material from the Calgary studio session, as well as other unreleased material).

Despite being the youngest member of the trio, Chadbourne was the leader in the sense of organizing the gigs and recording, and contributing most of the compositions, and this recording demonstrates how advanced his thinking was in the latter regard. It helps give a fuller picture of what Chadbourne and Baker were doing during this early period, and it adds considerably to the recorded legacy of Randy Hutton, the very fine Canadian guitarist who recorded elsewhere with the likes of Chadbourne, John Zorn, and Peter Moller. But while the historical interest is considerable, the music on The Guitar Trio in Calgary 1977 still sounds cutting-edge, at times almost exploding from the speakers, and showing how vast the timbral possibilities of the acoustic guitar really are.

• To order The Guitar Trio in Calgary 1977, please click here to visit the online store