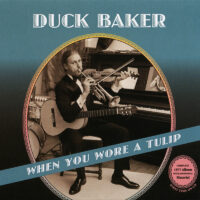 At long last Duck Baker’s second LP, When You Wore A Tulip, has been reissued on CD, by the Southern Summer label. The CD includes five bonus tracks that were recorded at an April, 1976 concert near Paris. These live tracks were first released on a limited edition cassette called Both Sides that was released by Stefan Grossman’s Guitar Workshop in 1987. With this release, all of Duck Baker’s five Kicking Mule records are now available on CD. Fans of his early playing can also hear more examples of it on two fairly releases dedicated to tracks that were not released at the time, Les Blues Du Richmond (Tompkins Square Records)  and Plymouth Rock (Fulica). At this point virtually everything Baker recorded during the 1970s is available in some form or other, though a few tracks will be included on releases scheduled for next year.

Those interested in ordering When You Wore A Tulip can do so from the Online Store
A PDF download of the TAB book that accompanied the original LP is also available.