Opening the Eyes of Love 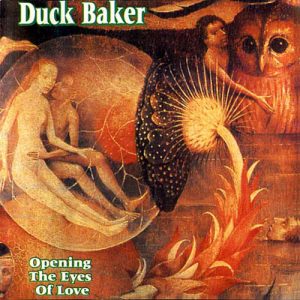 • Buy the CD from the Online Store

It should be obvious that the style(s) of composition here have as little to do with European classical tradition as the playing itself does with classical guitar playing. It would be accurate to describe most of the writing here as jazz or jazz-related (only ‘The Dodder Bank’ would be outside this scope) but I would like to point out, as quickly as possible, that some current ideas about jazz are very misleading. It is inaccurate, first of all, to think of jazz as separate from and superior to American music by its othernames—blues, gospel, rock, country, bluegrass, etc. These labels are of use to salesmen and, perhaps, introductory level music classes. Certainly historians of the music know that segregation has (happily) neverbeena condition of our music; Appa lachian whites learned from blacks, blues menfrom whites, and jazzmenfromevery body. It is undeniable that jazz itself is basically a black music, and my personal taste leads me to add that many of the most noted whitejazz names seem bent on proving the point. But it serves no interest (except cultural insecurity and possibly that of academics who would define the music by its technical trappings, not its guts) to talk about jazz as ‘American classical music.’ The myth that a certain level of complexity is required before we can talk about ‘art’ is as destructive a misconception as I know of.

What the greatest American artists almost all share–– from Robert Johnson, Bessie Smith, Louis Armstrong, Roy Eldridge, Charlie Parker, Thelonius Monk, Miles, Coltrane and Ornette Coleman to Roscoe Holcomb, Dock Boggs, John Sumners, Jimmie Rodgers, Roy Acuff, Iry LeJune, Bill Monroe and Hank Williams is an utterly unclassical cry that you’re more likely to hear in a honky-tonk than any music school. And really great improvisors are those who push our feelings to unexpected places. Which, of course, blues and gospel and bluegrass musicians all can do.

On a purely technical level —which is the level that, after all, we can discuss in concrete terms — it is still harder to separate jazz from the rest of it. Charlie Christian’s guitar style, for example, was a regional style that many Western Swing contemporaries played. In terms of structures, jazz has originated little. It has adapted and developed blues, gospel, folk and pop song forms, and its rare use of extended structures harkens more often to ragtime than to classical concepts. One might imagine that, say, an electric guitarist who plays a 12,16 or 32-bar theme over a solid swinging rhythm section, improvises 3 or 4 choruses and then takes it out is playing jazz, but it could be rock, rockabilly or country. It could even be blues great, Freddy King playing ‘Remington Ride,’ written by Bob Wills’ steel guitar man. If it is, its got more to do with Roy Eldridge than 99% of this years’ jazz guitar records! So don’t believe that jazz is as easily defined (or contained) as some people might make it seem.

I have, in passing, mentioned ‘The Dodder Bank’ as non-jazz related. This tune is in fact Irish-inspired. (I don’t like the term ‘Celtic’–– another particularly misguided attempt at attaining racial purity in music.) John Renbourn and Pierre Bensusan are both good at this kind of thing. The title is from a favorite poem of mine, by James Stephens (author of ‘The Crock of Cold.’)

When no flower is nigh, you might
Spy a week with deep delight
So, when far from saints and bliss
God might give a sin a kiss

There are four other tunes which, as they stand, don’t have any improvising. ‘Forget Me Not’ and ‘Contra Costa Dance’ are both examples of ragtime-type structures. ‘Letter to Davey’ on the other hand, is a jazz-gospel flavored piece, with content and form in line with ideas of hard bop writers like Horace Silver or Bobby Timmons. Both this one and ‘Come to Poppa,’ which is basically the classic 32- bar form, would work fine to improvise over, but I sometimes like just playing the tune. ‘Holding Pattern’ and ‘Seven Point One’ are both blues tunes in E. ‘Seven Point One’ is pretty straightforward, but ‘Pattern’ plays around with superimposing 6/ 8 on 3/4 and switching back and forth.

‘Pharaoh’s Army’ is not related to the traditional ‘Mary, Don’t You Weep.’ A break-down of the structure would seem complicated, but this is an illusion. These folk-form tunes always develop according to an inner logic that’s the antithesis of complexity.

I got theideafor ‘The Dirtman Cometh’ in Jerry Ricks’ kitchen when we both lived in Turin, Italy, about the time Jerry almost burned himself up trying to fry chicken at 4:00 in the morning (now wouldn’t that be a way for a bluesman to buy it?) This is an improvisation over one chord — not an easy one chord ride, though, with that right-hand slapping going on. ‘Miss Meadows’ dates from the same period –– maybe even the same kitchen— and uses the same slapping. Here’s another simple tune, some where between jazz and R&B in flavor, that has a structure that seems complicated: A- A-B, where A has 8 bars and B, 12. The improvisation this time is 2 chords, and leads to a worked-out variation before go ing back to the head. The original ‘Miss Meadows’ was a paragon of Southern Womanhood referred to in the Joel Chandler Harris stories.

‘Under Your Heart’ is a very complex structure, though simple harmonically. It almost amounts to reggae ragtime. The improvisation happens over the progres sion to the main theme (once through here, though I often play two) and on a long tag over the V chord (A). Note that the version written out is different than the recorded one. I left this because (a) if you learn the written one, you can pretty well get the other one by ear; (b) I thought a comparison would show how certain ideas are used in two different versions and (c) for the hell of it.

‘Opening The Eyes Of Love’ is a long, harmonically complexA-A-B-A theme with an improvised section that leaves the pro gression to work in a B-C#-D-E-F#-G-A

scale over a repeated bass figure. The bass figure idea can be used within a progression too (as in ‘Holding Pattern.’) Obviously, it takes time to get the bass part automatic enough to be free over it, but I think a progression this complex would be even harder to negotiate.

The main aim of these notes is to give the student clues for performance. If they can provide any notions regarding compositional possibilities per se well and good but, as has been mentioned, the structure of a piece will be suggested by the tune itself. Certainly, you don’t get ‘Miss Meadows by starting out deciding first to use the structure described above. I do, however, have a couple of suggestions for guitarists interested in fingerstyle composition.

Number one is listen to as much different music as you can. In this day of mass distributed recordings, that should be easy enough. Secondly, try your own hand at arranging in as many styles as you’d liketo know how to play. If you like ragtime, swing, Irish or French folk tunes, arrange them yourself. If you develop arranging skills, you’ll know what to do with your own ideas. The wider variety of music you arrange, the more different directions you can move in when something comes to you. Composition is arranging. Guitarists who have to play only their own pieces prove this over and over. 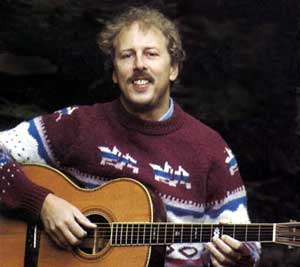 Last, and admittedly a little less important, listen to other fingerpickers. There are two strong schools at the moment; one is American descendents of the Merle Travis-Chet Atkins-Jerry Reed lineage, the other is Europeans from Davey Graham-Bert Jansch-John Renboum, to Dave Evans and Pierre Bensusan. Of course there are lots of people who don’t fit into those camps, like Peter Finger, Eric Lugasch, and my current favorite, Pat Kirtley. My own playing is in between too, I guess. I like to tip the hat to Jerry Reed (‘Seven Point One’) and Mr. Graham (‘Letter To Davey’) and anyplace else I can. Probably my own favorite style of composing is modern jazz pianists— Thelonius Monk, Bud Powell, Elmo Hope, Randy Weston and Dollar Brand all knock me out . I am sure that the directions opened up by these great composers hold spectacular possibilities for fingerstyle guitarists.