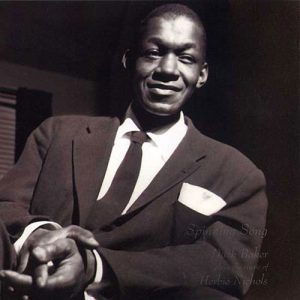 Ace finger-picking guitarist Duck Baker has released one of the more exciting recent albums on the guitar scene, and its appeal goes beyond guitaristic aplomb. To name a couple of virtues: here is yet more persuasive evidence that the late, undersung jazz pianist Herbie Nichols, whose music is lovingly visited here, remains a jazz innovator deserving much broader attention; secondly, Baker’s spunky fingerings and syncopated charms make a good case for the application of finger-picking versions of jazz material. At the suggestion-and with the label advocacy-of fellow Herbie Nichols champion John Zorn, Baker undertook the project of arranging songs by Nichols, who left a treasure trove of delightful oddities. The seductive angularity of Nichols’ music, in tunes like “The Third World,” “Lady Sings the Blues,” and “2300 Skidoo,” is reminiscent of Thelonious Monk’s music, but with its own weird flair. As with Monk, a deceptive complexity is at work here, between artful “wrong” turns, harmonically, and riffs that work their way into your head, before your cognitive mind can identify them as illogical. Illogic rarely sounded so good, a subtext that Baker seems to understand fully.

This CD consists entirely of solo fingerstyle guitar renditions of pieces by the legendary Blue Note pianist/composer Herbie Nichols, and as with Nichols’ music — which was nearly always performed in a standard piano/bass/drums trio format — there is a lot more going on here than the somewhat routine surface suggests. Nichols’ compositions have their own sort of ambiguous, hard-to-pin-down harmonic aroma, filled with subtle harmonic twists and soft dissonances, but Baker somehow captures it in these versions even when he detours from the originals. He swings naturally and effortlessly when he wants, but he also takes things outside and gets abstract in his own quiet way, most notably on the remarkable version of “Nick at T’s.” Folks who are new to Nichols’ music would probably find it helpful to know the originals, since Baker rearranges several of them, tosses in quotes from other tunes, and generally does more improvising than the pianist was prone to doing. In any case, this album is a fine piece of work, one with the same type of subtlety and deceptive-sounding ease for which Nichols was/is known.

When the pianist and composer Herbie Nichols died in 1963, his work was little known outside of a small circle of colleagues and admirers. A contemporary and associate of Thelonious Monk and Bud Powell, Nichols made joyous music by fusing complex rhythms and harmonies. With the recent release of his complete Blue Note recordings, however, Nichols’s work has begun to reach the wider audience it has always deserved. This disc stands out among CD tributes for the way in which Duck Baker has fused Nichols’s compositions with his extraordinary finger-style guitar work. Baker has entered deep into the spirit of the music and found ways to match Nichols’s polyrhythmic and contrapuntal keyboard approach on his own instrument. The results are musically as well as technically brilliant, rich in the blues and Caribbean rhythms that fueled Nichols’s musical imagination. These tunes deserve to be jazz standards, and Baker demonstrates why.