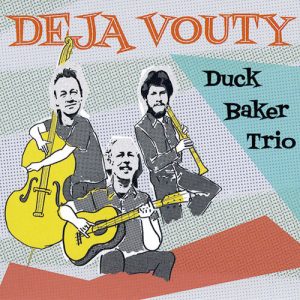 Available to buy from the
Online Store

This is the third CD I have made with the trio I have worked with since 2006, and the first since bassist Joe Williamson moved to Stockholm in 2013. Joe’s place in the group has been taken by John Edwards, though that’s not really an accurate way of putting things because both of these guys are terrific bassists and band players, and they each bring their own unique musical personality to whatever setting they find themselves in. Alex Ward still plays the clarinet with us, thankfully.

All of the tunes here are originals that are new to record, including a few written in 2013-14 on commission (part of a body of new pieces called Pareto Sketches). But most of what’s here was written in 2011-12. I remember having a conversation with the great Italian guitarist Michele Calgaro early in that time frame, and mentioned that I written “un pezzo pazzo” (a crazy tune) that had a sort of 5/4 funk groove. Michele remarked that this could be a fun title, and so it came to pass. Of course there’s a salute to the great Bud Powell and his “Un Poco Loco” implicit in this. Another piece that depends on unusual time signatures is the blues tune, “Short Nights”, written in the departure lounge of Gatwick Airport on too little sleep. It’s basically in 3/4 for four bars and then goes to alternated measures of 3/4 and 2/4, though the tune doesn’t sound as complicated as this description makes it seem.

At some point I got interested in the fact that the great beboppers didn’t compose in 3/4 at all, and thought I would try my hand at some bop contrafacts in 3. One thing I soon realized was that having shorter bars can make some of the standard progressions less comfortable vehicles for improvising, but that is not a problem with “Deja Vouty”, which employs the leisurely harmonic scheme of “Sweet Georgia Brown”. I found that bop in this time signature lends Itself naturally to a tongue-in-cheek approach, hence the appropriation of one of Slim Gaillard’s terms, “Vouty”, for the title. (Note: though Gaillard usually pronounced his favorite nonsense word “vow-tee”, he also used “voo-tee”.)

“Twelve Gates” takes its name from the length of the A section. I like the way 12-bar structures can lend to a simple kind of melodic restatement. There is no connection between this tune and the classic gospel songs that use the same title. “Talkin’ to You” also uses a 12-bar structure for the A section; in fact it’s a variant of the classic blues form, with an 8-bar bridge. “The Odd Fellows March” Is one of the only titles I ever came up with that I am absolutely certain is the right one for the tune.

A few of these pieces evoke older jazz tunes, however obliquely. “You’ll Have That” is a hard bop line that takes off from Hank Mobley’s “No Room For Squares”, the beginning of which kept getting into my head. “The Blues Is The Blues Is The Blues Is” also evokes an earlier tune, “When Lights Are Low” by Benny Carter, though the reference is even briefer in this case. And “A Buddy Uptown” makes a couple of allusions to “Buddy Bolden’s Blues”, which was supposedly written by Bolden’s trombonist, Willy Cornish, in the 1890’s. The first two measures follow the general contour of the melody, though not the notes, and of course this tune is longer and more modern (hence the tide). There’s another melodic reference in the B section (where bar 7 echoes bar 3 of the older song). Finally, I was thinking of Ellington and Strayhorn with “There’s No Time Like the Past”, and Sonny Clark when I wrote “Marking Time”. Whether any of this comes through at all, I couldn’t say.